Back in September I remember saying that I wanted to document my journey with getting a job after graduating. I posted this and this. Well that didn’t happen. While some people probably have an offer waiting for them when they graduate, I’m still stuck at step 1. I have no idea what I want to do and only applied to like 5 positions back in September.

Why am I saying all of this?

Well because today I went to a networking event of sorts. This time it was organized by my school’s career centre and they brought in economic alumni to share their stories.

PS. I had a good time and I do not regret my decision to go.

Fun fact: I almost didn’t go. I almost talked myself out of going. Several reasons. Some made more sense than others, but I still went.

Since all the panelists were economic alumni, they all shared their experiences of how they got to where they are today. One was a chief of staff, another a senior policy advisor and a head product manager.

Side note: Just my luck that I got onto the elevator with someone who turned out to be one of the panelists at the event. I did not realize that until after.

Things I took away from the event were:

And if you read all of this, and you’re like me and you’re not the type to go to events like that, well yayyy. Can we be friends? But on a serious note, its not as scary as you think. Just be in a small group and let them know your name.

I tried to get to know the individuals for who they are. I did not go into this with the intention of getting a job. And my questions definitely reflected that. While others asked about all these job related questions, I asked one person [who was the only woman there and was a person of color] what were the challenges they faced as a woman and a person of color and I asked someone else why did they start voluntering? What was a quote they lived by. [And they had a bracelet/rope on their hand and I was curious about that but I don’t think that was a good question on my part].

Something that I encountered during this event was that some people like to talk a lot and don’t let others put a word in. I think a good conversation in a group setting requires listening to others and letting everyone else speak. There was this girl who would ask question after question, without letting others ask questions. And if it wasn’t the panelist who prompted me, I wouldn’t have gotten a word in. I get that you can be enthusiastic, but at least be considerate to the people around you. You don’t want to be that person.

I’m going to end it here because this is long enough already. On Thursday I will be going to another networking event, so stay tuned for those rambles. But in the meantime, I will go finish my readings, catch up on Below Deck and head to bed with the hope that I am not late for class like last Wednesday. 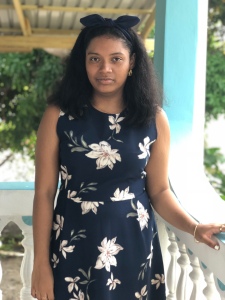 My name is Aaliah and this is my safe space to share stories, memories and experiences about my life. I need to learn how to open up, and so here is to doing just that.